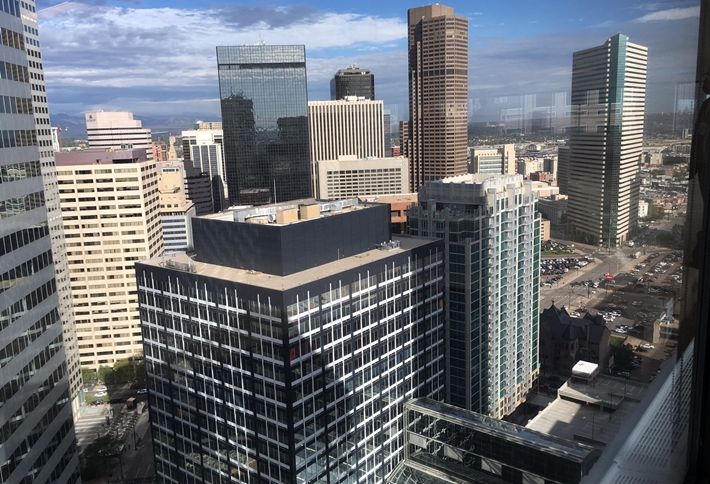 Downtown Denver Is Thriving, But Now Has Big-City Challenges

Most everyone can agree now’s an extraordinary time in Downtown Denver, but where does the market go from here? According to the speakers at our Future of Downtown Denver event, the influx of people and businesses will continue to support growth, but the challenges—finding the right sites, construction costs, traffic—are growing too.

A lot of remarkable projects are going on in LoDo, many of which our speakers are making happen. Dairy Block, near Union Station, is both new construction and the preservation of historic properties, and includes the 172-room Maven hotel, office and retail space. The block’s alley component, an experiential part of the development, is now coming online, with 30k SF of retail accessible from the alley.

TAG Restaurant Group, whose namesake restaurant is in LoDo, now has nine restaurants, and four or five new ones coming next year.

The dual AC Hotel-Le Meridien Denver is a first for Starwood and Marriott, and out to attract the creative-minded traveler. Travelers want to experience the destination, and the aim of the hotel is to unlock Denver as a destination.

Larimer Square has an alley in the works as well, part of the ongoing development of the property, which has transformed over the decades from a skid row into a city center ripe with one-of-a-kind offerings.

A question that concerns LoDo and Downtown: how many new hotel rooms and restaurants are enough? The area added more than 1,000 hotel rooms in the last two years, has 1,300 under construction, and another 900 in early stages of planning, our speakers said. So there’s a lot of supply. There’s a lot of demand as well, but the most successful properties will offer new experiences to travelers.

As for restaurants, there are about 250 new restaurants in Denver, with 70 in Downtown, so the competition is stiff. But there are opportunities for skilled chefs with unique offerings, since diners are looking for something more from their experience.

Traffic’s a growing problem everywhere in the city, and a long-term challenge to the city’s livability. If Denver as an urban destination wants to grow beyond RiNo and LoDo, traffic will have to be addressed; people will have to get out of their cars.

Development opportunities in Downtown Denver are tougher than they used to be, our speakers said. Many of the value-add opportunities have been taken, and no property anywhere is cheap. Also, construction costs are high.

The lack of condo construction has impacted rental affordability, so the defect issue needs addressing. Still, 100,000 people are moving to Colorado a year, most of them to Denver, a dynamic that’s supporting the market. As long as people want to come to Denver, the city will thrive.

The event was held at raw space at Unico Properties’ 1660 Lincoln, recently renovated, which also has some terrific views of Downtown Denver.