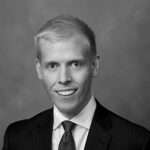 Tyler Hendrickson grew up in MN and graduated from the University of St. Thomas in 2012, obtaining his bachelor’s degree in Business Administration & Finance, in addition to developing a passion for commercial real estate and learning Argus during his time in college. Following graduation, he moved to Denver.

Tyler began his commercial real estate career in Denver with Marcus & Millichap in 2012 as a financial analyst, focusing on the investment sale of office, retail, and industrial throughout the front range. In 2015, Tyler transitioned to Cushman & Wakefield, where he continued in his role as an analyst. Throughout his 9-year tenure on the brokerage side, Tyler was directly involved in over 60 commercial transactions of all sizes, types, and complexities, with an aggregate value in excess of $3B. In addition, in that 9-year timeframe, Tyler played a significant role in the professional growth of the brokerage team, starting his career with a team of two, which had grown to seven prior to his departure.

Tyler joined CentrePoint Properties in 2021 and focuses on new commercial acquisitions, in addition to asset management, leveraging the robust skillset and market knowledge he developed during his career on the brokerage side.